I’ll give you two reasons you should grow these mushrooms.

One, shiitake mushrooms are rich in proteins, minerals, vitamins B and D. On top of that, they are low in fat and calories.

Two, you can refrigerate them for up to a month or dry them so they can last up to 2 years.

A bonus reason to start your garden is that shiitake mushroom growing is not a demanding hobby. You get a log, inoculate it with shiitake mycelium, then leave the mushrooms to grow. In about six months to a year, you’ll reap your first harvest.

Hydrate it in a water bath for 24 hours before inoculation. Use fresh-cut wood, preferably between one day and three weeks after felling it, or it’ll have less moisture and competitive fungi. In the video, Jason uses a log harvested about three weeks earlier. 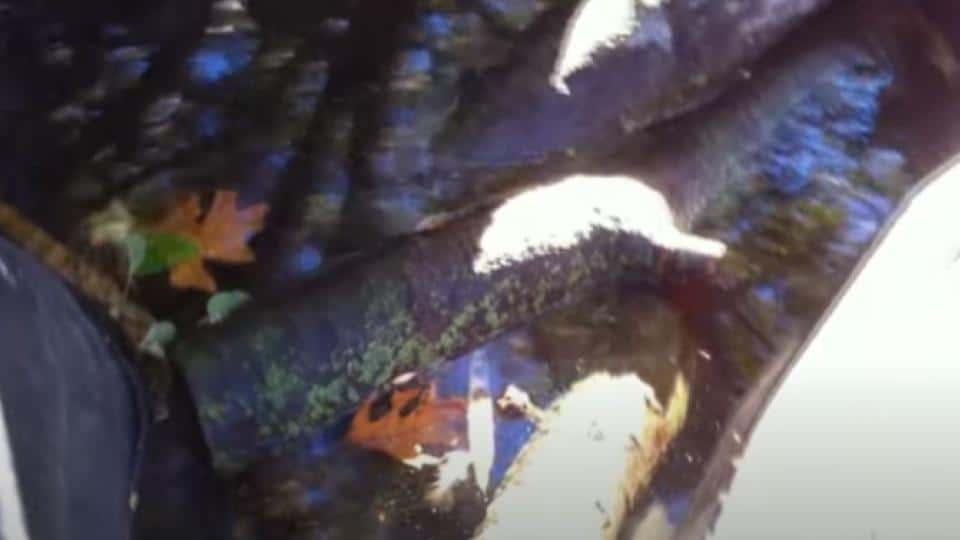 Oak is the top choice here because it’s the inoculation log used in Japan, where shiitake mushrooms originate.

2. Mark the Spots to Drill

Place the log on a sawhorse or other working surface where you can drill safely. Measure and mark the holes along the circumference of the log. TheUrbanFarmingGuys drill six lines of spawns on the trunk of a six-inch oak log. 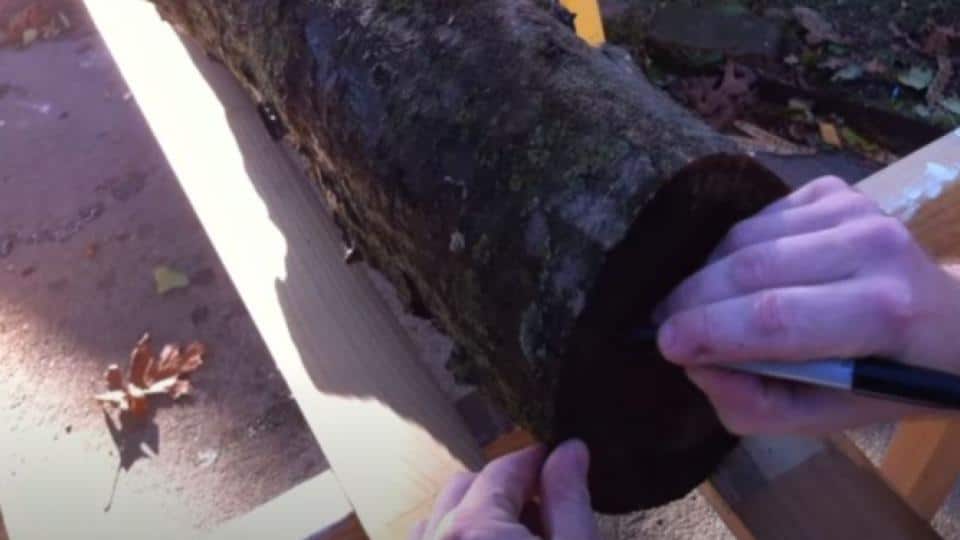 3. Mark the Depth of Hole on Drill Bit 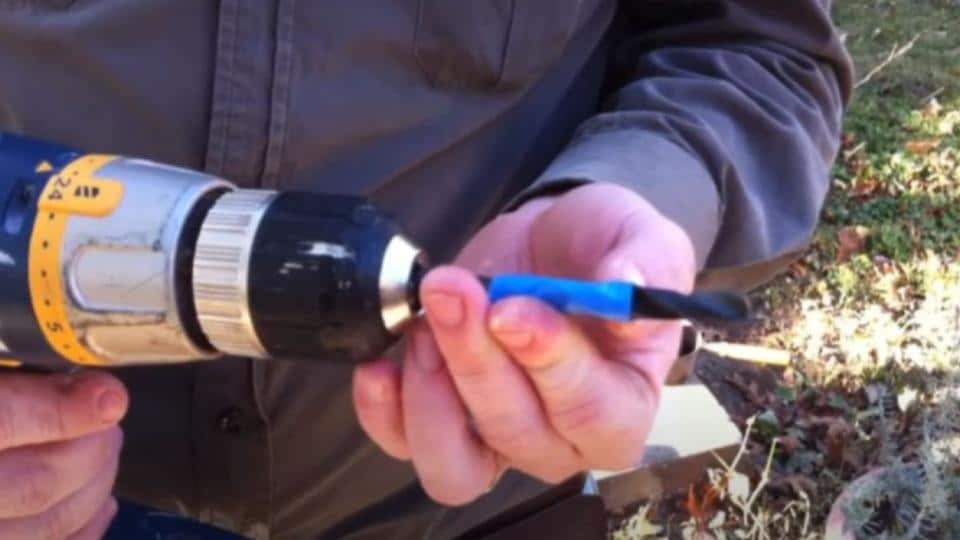 Drill a row of holes six inches apart to give the mycelium space to gather nutrients and grow. 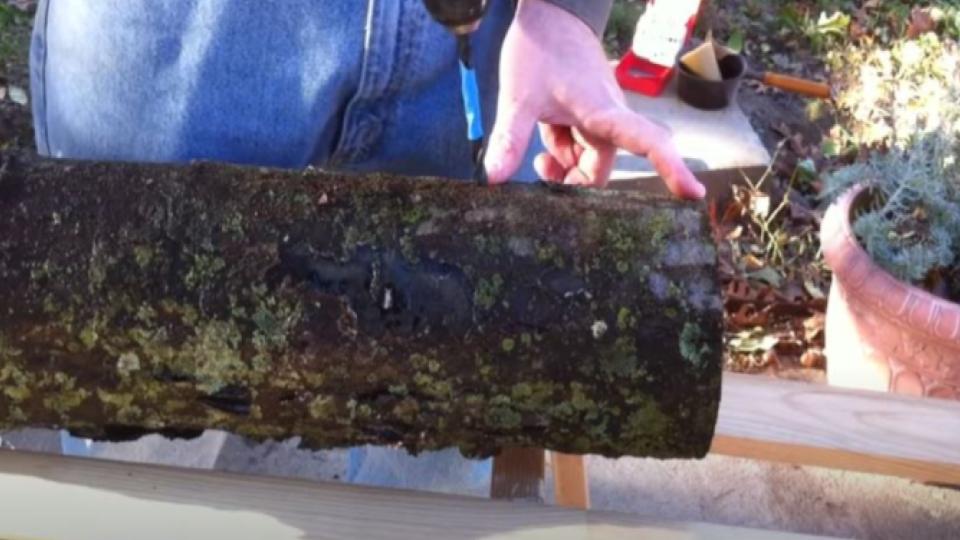 If your sawhorse is not stable, your log will lift on the opposite end as you drill. It may also roll or fall off your working table. Note that the standard distance between two holes is six inches, irrespective of the size of the log.

Turn the log to see the next row to drill, and each subsequent hole drilled on the new row should be below the center of two holes of the previous row. 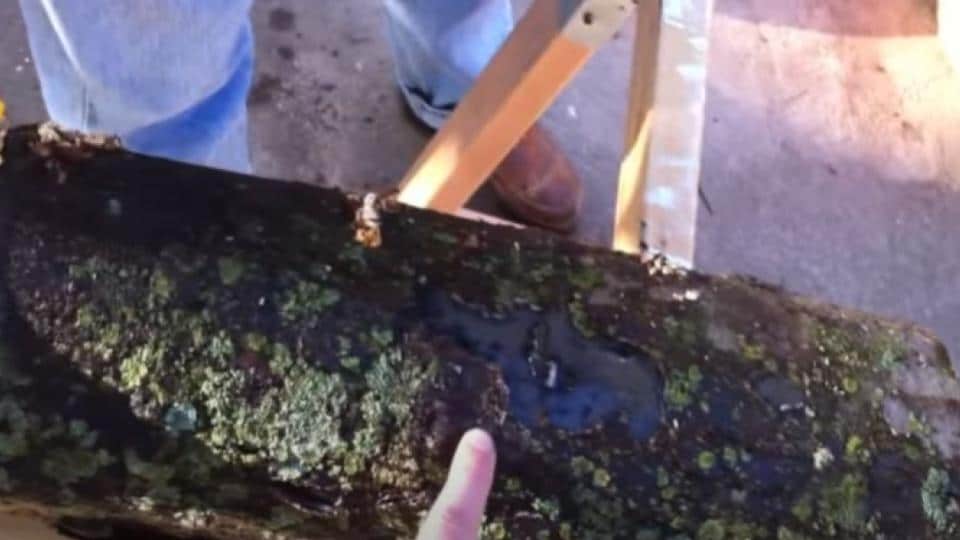 Drive them in as much as they can go. Using plug spawns is cheaper than sawdust spawns as you only need a hammer, not a special tool, to insert them in the log. If they are still popping, place a blunt object over the protruding plug spawns and hammer them into the hole. 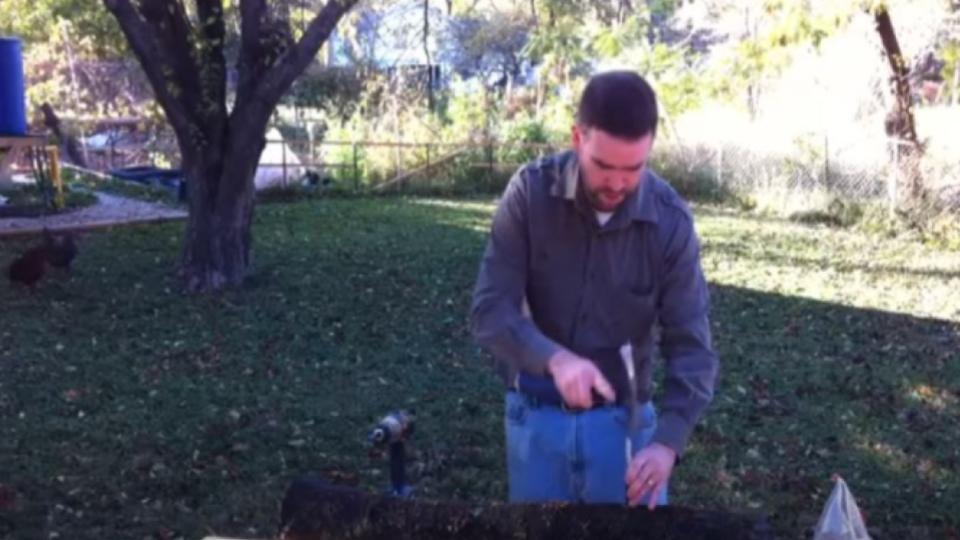 Melt the block of beeswax in a saucepan.

Other sealants you can use are candle wax, paraffin, and cheese wax. The amount to melt depends on the number of holes drilled on your log. Therefore, the size of your oak log controls the amount of work you’ll do and the resources needed. 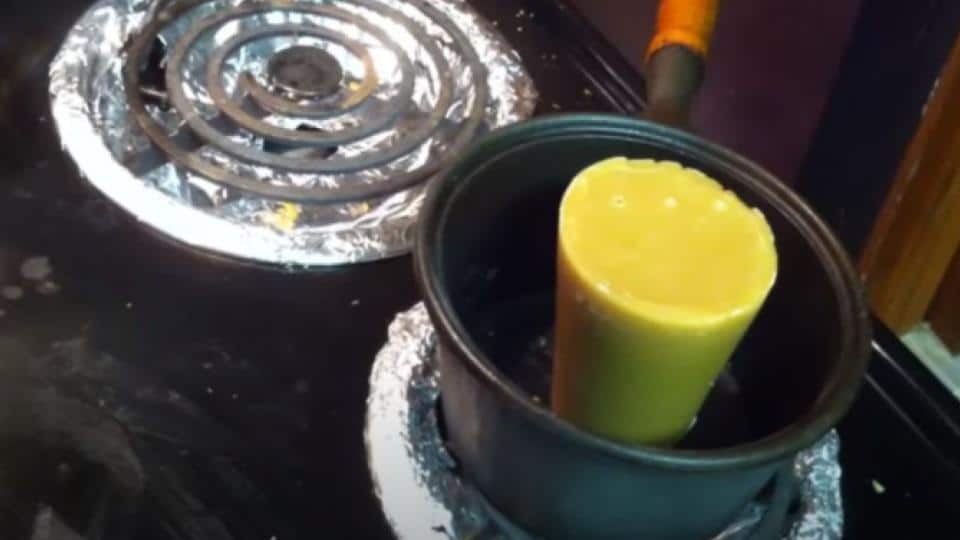 Use it when it’s hot so that it seals the holes completely. Pour it into the holes with the plug spawns. 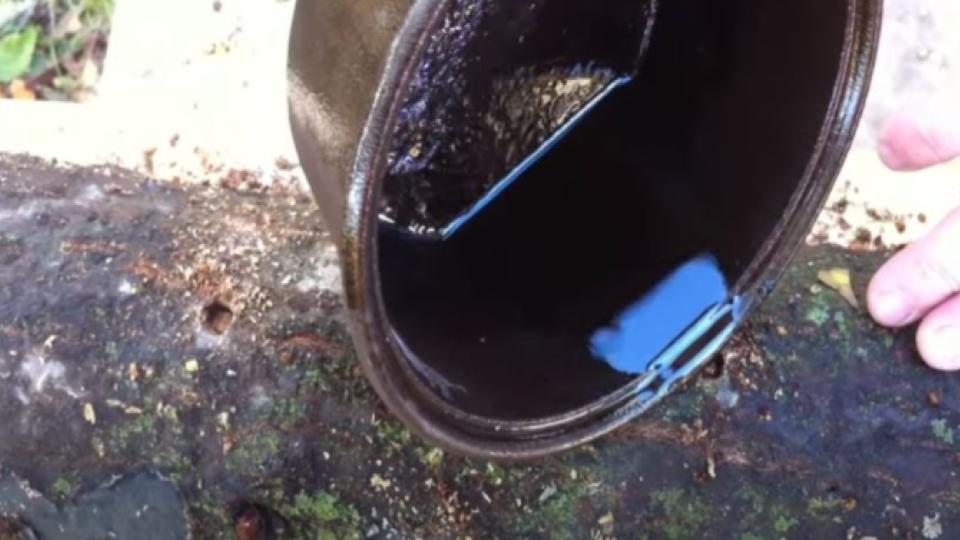 If the beeswax spills out, don’t worry, as it’ll dry out.

Beeswax will prevent other fungi from competing with the mushrooms. It’ll also prevent moisture loss from the log.

9. Wait for Mushrooms to Grow 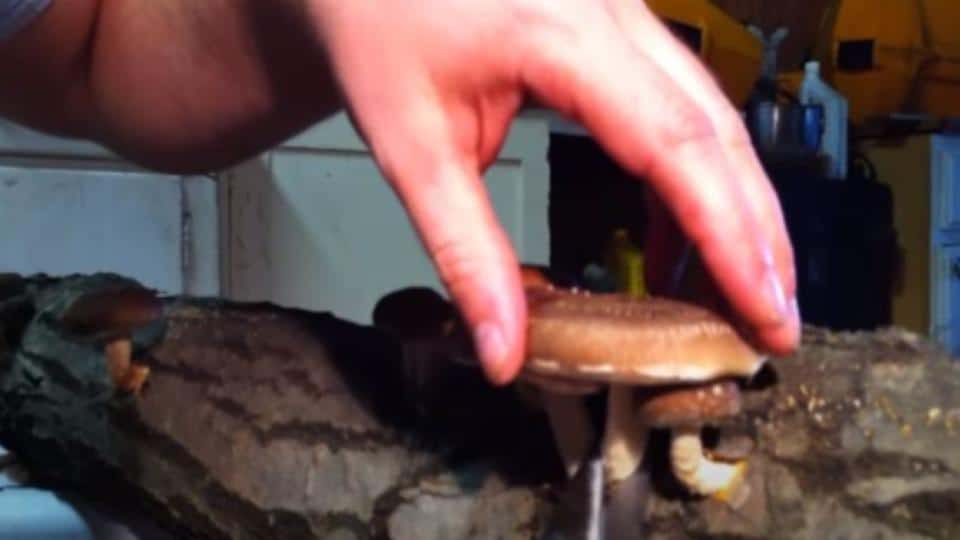 Keep the log under a shade to reduce moisture loss. One of the best laying yards is in a coniferous forest. However, the log should be accessible for soaking when the weather is too dry.

How Long Do Shiitake Mushrooms Take to Grow?

If you’re starting your shiitake garden from scratch, it’ll take about six months to a year. You’ll see some growth three months after inoculating the logs, but the time it takes to fruit also depends on the shiitake mushroom strain and the wood used.

Can You Grow Shiitake Mushrooms Indoors?

Yes, you can grow them indoors. There are many ways to do that, from using a bucket to totems. These options make it feasible for households without a backyard.

No, they are edible. But, some people may develop an allergy as with other foods. You need to watch out for contaminated water reaching the log or fecal matter from animals as these can contaminate the mushrooms.

Can I Grow Shiitake Mushrooms in a Bucket?

Yes, though they do better in oak logs. If you must use a bucket, drill holes in the bottom to release excess water and on all sides for air circulation. Clean the bucket afterward and dry it.

Further, sterilize the bucket before adding the sawdust spawns, and you have to seal it off for about two months without opening the bucket, or you’ll contaminate them.

If you’re growing some for profit, yes, shiitake can bring you good money. Though these specialty mushrooms aren’t the most expensive, they cost more per pound. Between 2019 and 2020, the average price per pound was $3.44, while oyster mushrooms went for $2.70.

No, they are not illegal in the U.S. Before 1972, you couldn’t import mycelium culture into the region because of its lignicolous nature.

The idea behind the ban was to prevent the uncontrolled spread of the fungus beyond the cultivated area for fear that these mycelia could colonize all timbered structures. But now, it’s a food item praised for its nutritional value.

Can You Regrow Shiitake Mushrooms From a Kit?

Yes, you can use mushroom growing kits. They come in blocks that produce enough mushrooms for consumption or profit. Once you get your mushroom block, store it in a refrigerator for a minimum of 12 hours and a maximum of 24 hours. Alternatively, you can leave it outside overnight if the temperatures are under 40 degrees.

Next, uncover the block, leaving the plastic bag on the lower side so the bottom won’t fruit. Indoors, it can get sufficient light when placed in a well-lit area that’s about 80% humid. The mushrooms will be ready to harvest within a week and continue fruiting every so often.

Mushroom kits aren’t messy as you place the block on a plate or other waterproof platform to drain the water. You mist it about three times a day, harvest, then forego misting for about three weeks.

What Is the Best Substrate for Shiitake Mushrooms?

The substrate chosen should have enough moisture and nutrients for mushrooms to grow. Based on those needs, most people pick hardwoods like oak because you harvest for more years.

The least popular trees include ash, poplar, and red maple. But, it would be ill-informed to ignore other factors that influence mushroom yield and focus on the substrate choice only. For example, your mushrooms may take time to fruit because of the spawn strain, the climate, and inoculation conditions.

For indoor cultivation, sawdust blocks made of sawdust from hardwood trees are among the less demanding substrates.

When considering the substrate to choose, bear in mind that the taste and shape of the mushrooms vary from one substrate to the other. For example, the ones grown on musclewood may be flavorless.

How Do You Grow Shiitake Mushrooms in Coffee Grounds?

Shiitake does better in a log as opposed to other substrates. Oyster mushrooms do better in coffee grounds than shiitake. But, if you’d like to try, it’s as simple as using oak logs or a mushroom kit. First, drill several holes on the circumference of the bucket, about 3/4 way from the bottom.

These holes will be exit points of carbon dioxide since you’ll seal the bucket. Now, pour moistened coffee grounds used in the last 24 hours almost to the level of the holes drilled earlier. After that, mix sawdust spawns with the top layer of the coffee grounds.

Cover the bucket with a plastic bag, then poke some holes for air circulation. Leave the bucket in a dark corner for about three weeks. Later, move it to a spot with light and mist the mushrooms with water daily.

For four or more years, you’ll harvest shiitake mushrooms almost every four weeks. It’s a worthwhile investment for nutritional value and financial gain. Further, you can start with one log to learn the process.

As you increase the inoculation logs, you can try other hardwoods to find the most productive one. Growing shiitake isn’t only for people with a backyard where they can store your log. No, you can grow shiitake on other substrates and indoors too.

TheUrbanFarmingGuys showed us you only need an oak log with a six-inch diameter to start your shiitake garden. Jason made the process look so easy, and the 3-day growth of shiitake captured on the phone is captivating. Who knew shiitake grows at that rate in a few days?