Before I get into the meat of this review, I want to structure this away from regurgitating specifications like every other review of this sort and instead spend it musing about what this product represents to so many people the world over. Bulletproof vests are not about looking badass (even though I totally do). They’re about second chances folks and this is something I really want to stress.

Every year, good people die needlessly. People go to work in high risk areas and get gunned down. I am not here to sugarcoat some moronic review about how many times I can get shot with this on and be okay. Because frankly, it’s statistically unlikely I ever will.

Talking about products like this is important because I know some of the people who read this work in high risk environments. Maybe you found this by Googling for bulletproof vest info and are on the fence on whether you need one. Regardless of how you came across this post, however, let me be crystal clear. If you work in an environment that’s dangerous to the point that you are researching ways to mitigate the risk of getting shot. Get a fucking vest.

A vest can mean seeing your family again, kissing your kids to bed one more night. You get the picture. 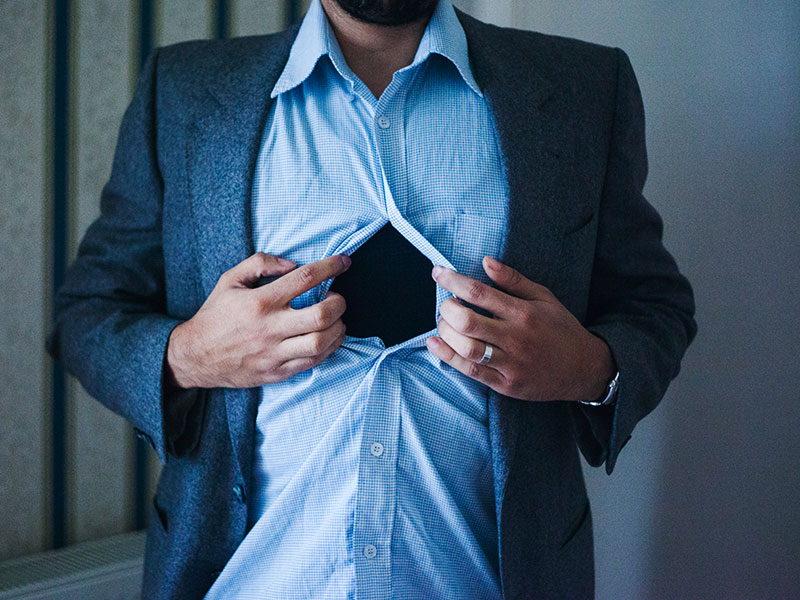 The SafeGuard Armor “Ghost” (super conceal option) is honest to goodness high end body armor. For the sake of completion, I will spit out the obvious-

Any legitimate bullet proof vest will list the protection level of the vest in question as well as the manufacturing date. Yes, Kevlar does indeed expire.

The Ballistic Level for the particular vest is: Level IIIA (NIJ 0101.06)

It does not have Edged blade level, nor a spike level. However, those are options with SafeGuard (for reference, their protection levels are listed here).

The Level IIIA protection means it can withstand effectively most handguns calibers, including .44 magnum, which I daresay is likely the largest caliber you would commonly find on the “street” wielded by a criminal. Naturally, stupid calibers like S&W .500 Magnum will be more problematic and require additional protection, most likely in the form of ceramic plates, but I am no expert on this so chime in with your thoughts in the comments. 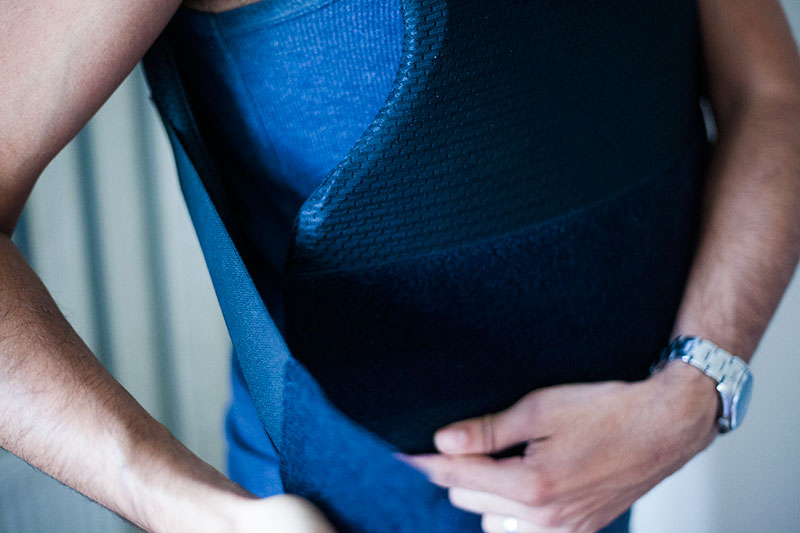 I get daily requests from companies to do reviews of their products. I say no to 99% of them because they either produce garbage, my readers won’t be interested, or I plain don’t like the company and the way they do business. When SafeGuard reached out to me, initially I was amused (Me? Review a bulletproof vest?) but as the day progressed, I started thinking about how many innocent lives have been lost so far this year to violence.

Companies like SafeGuard do something that to me is truly insane. They create a product that saves lives. Literally. It stops bullets.

We associate bulletproof vests so much with military applications and the uber tactical crowd, but as I hold the vest in my hands, I find myself thinking about regular, everyday people who work behind the counter in high violence areas. Security guards, mailmen who get attacked oh so often. It’s just crazy to me that this type of product exists, and people who work in environments where getting shot is a real, daily reality still opt out of using it because they don’t want to give the “wrong impression.”

You think your husband or wife will care about how you looked if you survive a violent altercation? 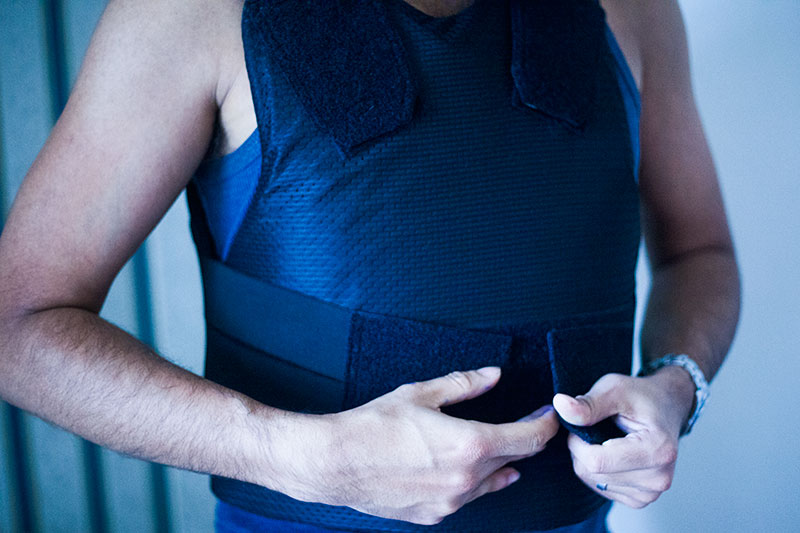 Nonetheless folks, perception is often reality. Good people don’t want to rock the boat and look armored, which is why the Ghost is such an interesting vest. It’s not invisible, but taking into account that its Level IIIA, I think it’s pretty damn subtle. The design of the vest means the vest itself can be washed whilst the inserts can be removed, exchanged for higher or lower protection ones (as needed perhaps?). It’s a product that is well thought out because frankly, it needs to be.

No product will have so much thought put into it. Ever. Plenty of Spydercos are well designed, but Sal doesn’t have to think about his blades stopping a bullet one day. It’s a bit different when your product acts as a buffer between your client and an attempt on his life. Can you imagine the pressure? 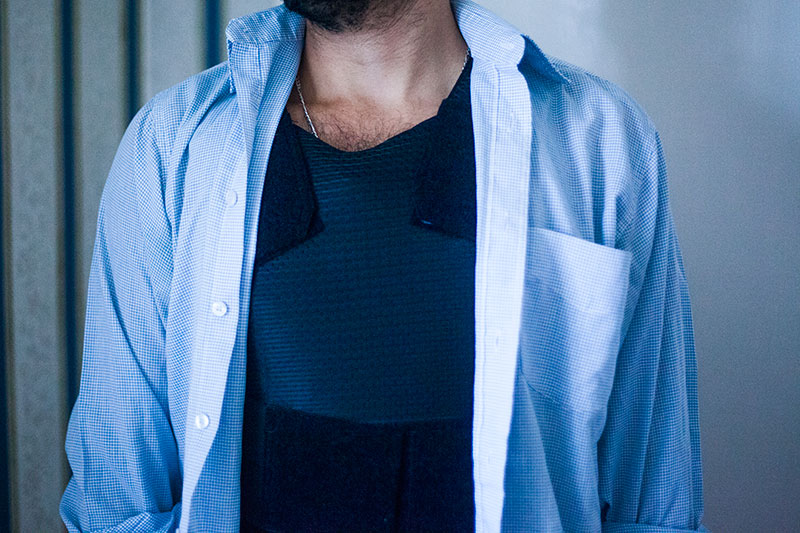 So yes, it’s effectively pretty perfect within the inherent limitations. At the end of the day, it’s an armored vest. The nature of the bias for being easy to conceal/be incognito does mean that the design is really focusing on protecting vital areas, but honestly, wearing this I feel pretty damn secure (also weird; imagine me walking around the house with this on!). 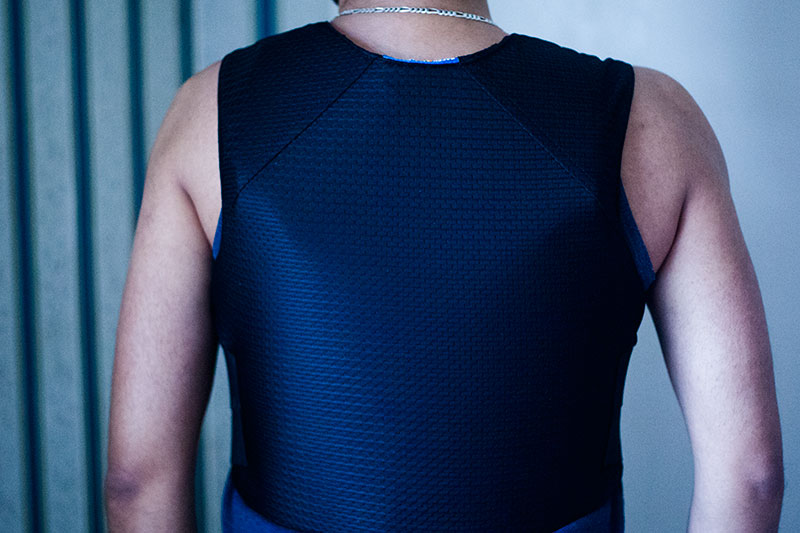 The photograph below says it all folks. You can shoot me with a .44 magnum and an ungodly amount of testing and over-engineered design means I will most likely live. Think about that and now recognise that if you face threats on a daily basis, you need something like this in your life. It’s subtle, very light (for an armored vest) and very comfortable. 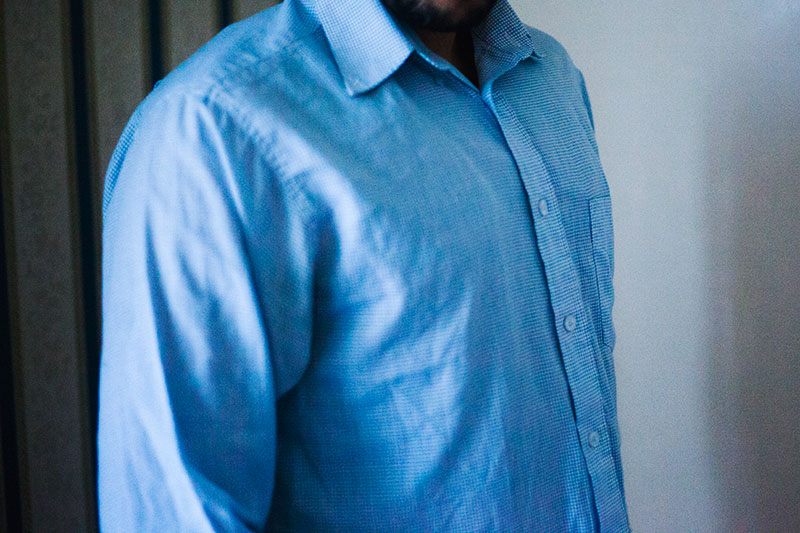 Yes, it’s still going to slightly print, but unless you know what you are looking for, the vest is basically undetectable with the right clothing. 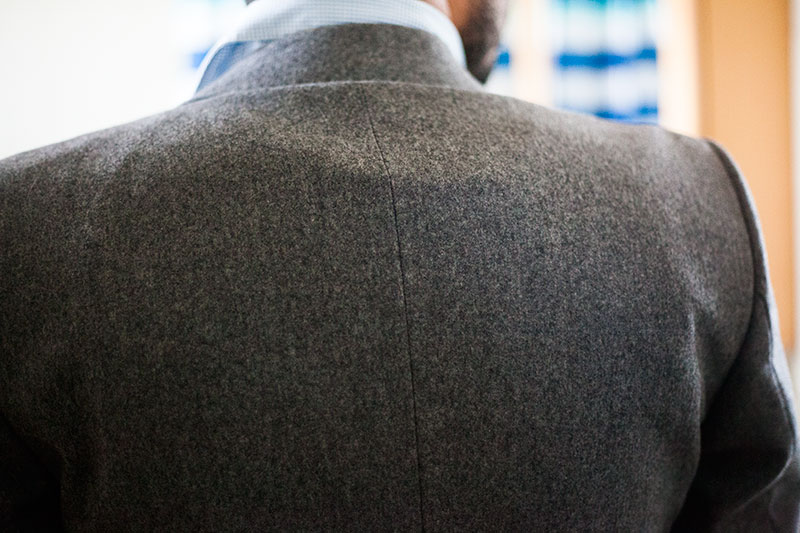 A lot of the thoughts I have about the SafeGuard Ghost are as a direct consequence of being someone who has never worn an armored vest before. There is definitely a sense of tightness and pressure from having 2 slabs pressed against your stomach and back. It’s obviously not a problem for most activities, but for the purposes of doing this review, I did try to sleep with it (actually that was fine), I ate with it (as long as it’s not a crazy meal, it was fine) and generally walked around trying to gauge how subtle I looked relative to how tough I felt (definitely can’t help feeling more secure while wearing that kinda getup!). 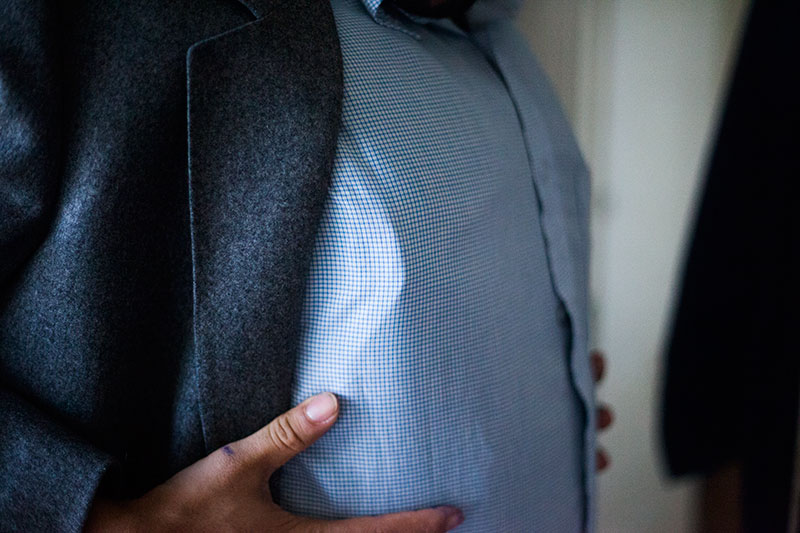 Again, for the sake of completion, as you know I did move to Portugal early last month. Folks, let me tell you;

So I chilled in my garden (excuse the mess) in 28 degree weather for a good while. Yes, sweating occurred and I can’t say I was ecstatically over the moon with the experience, but as I went back inside, I realized my discomfort was general in nature – nothing to do with the vest. In fact, I didn’t even think about it when it was on. To me that says it all with regards to comfort. We can spend hours discussing the type of nylon fabric used or special magic mesh, but plainly put, it’s super breathable and if you suffer, it’s because the environment wants you to suffer – not the vest itself. 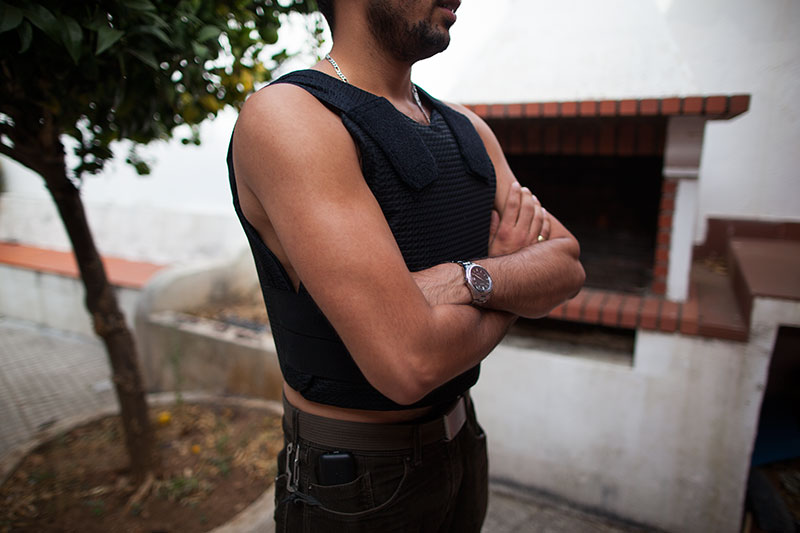 It feels weird typing out this review, but whats even weirder is the notion that it should be weird.

When I bought my new house, I fretted endlessly until my new shiny smoke detectors (Nest – fully recommended) arrived.

I want the security of being alerted to risk and maybe being able to do something about it. Fire extinguishers in every room with a heat source + fire blankets in other locations. We have fully loaded house insurance that even covers the garden walls from earthquakes, but a decent possibility of being shot and yet not doing anything to mitigate it even though there are products like this around is somehow a common occurrence in this day and age. That’s the truly weird thing. 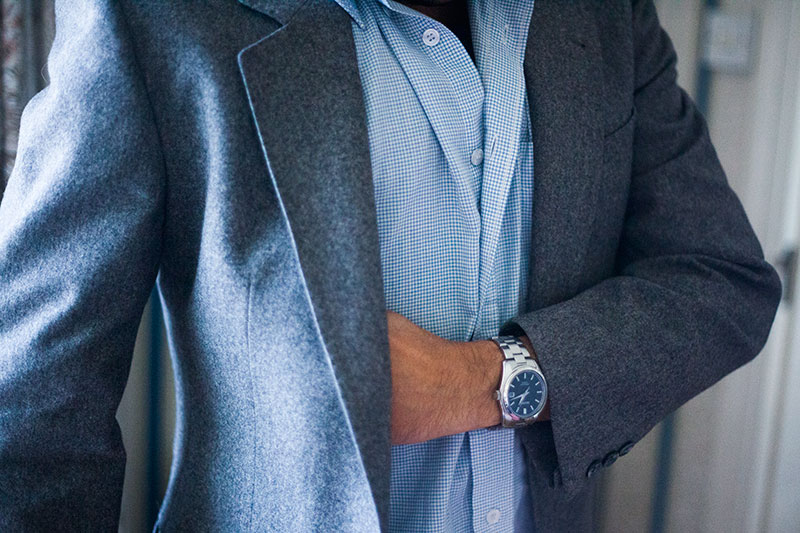 I imagine spooks wear something similar. The SafeGuard Ghost does lend itself to a feeling of having something secret that is so game changing in so many situations. I once saw a relatively small female bobby (British Cop) tackle a full-grown man. I remember being impressed with her chutzpah, but I do in a way understand that feeling of strength having this level of protection gives you and the passive confidence you get as a consequence.

I am fully aware of how privileged I am not to face the threats so many others do on a daily basis, and if I can bring awareness to a discrete option that would be palatable to effectively anyone in 99% of environments and maybe give someone a second chance at life? Then my job is done.

In so far as the value proposition of the SafeGuard Ghost – I don’t know, how much is your life worth?